What is Process Service? 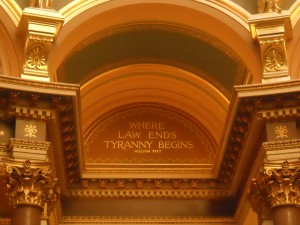 Process service is a vital part of every citizen’s constitutional right to due process. The concept of due process originated with a group of English barons who were infuriated that King John would simply take their property if there was a dispute. The barons joined together and outlined a procedure for handling disputes – a version of which is still in effect today and commonly referred to as “civil procedure”. The name of the document they penned: the Magna Carta.

How does due process work in today’s world?
Let’s say you have a complaint against a person or a company. You formalize your complaint in writing, take it to the courthouse and file it or you can hire an attorney to do this for you. The clerk logs the complaint into the official record and assigns a case number to it. The next step is to notify the defendant that a complaint has been filed. That is where the process server comes in. Process servers are independent, neutral third parties that deliver notice that there is an action pending.

As soon as the defendant (or respondent) receives notice via the process server, the defendant typically has a designated number of days within which to file a formal answer at the courthouse.

Do I need to hire a process server?
Most state and federal courts require you to have your legal documents served by an independent third-party process server.

What if I don’t know WHERE the person is whom I need to serve?
Sometimes called skip tracing, Iowa Process Service offers one free restricted database search with each process service we receive. Once we have your documents, we can begin the search.

Doesn’t the sheriff serve papers also?
Yes, they do, however, they have many other duties, many of which may take priority over process service. Process service is all that we do and it is our Number 1 Priority!